Assign a task to team members

Every message you write in pageplanr can be turned into a task assigned to a particular team member. The advantage of working with tasks are twofold: Tasks get highlighted with a red tag in any list of messages so you can see at a glance everything there is to do. And every team member gets a list of all his tasks in his profile, where the tasks can be marked a done by a simple mouse click. 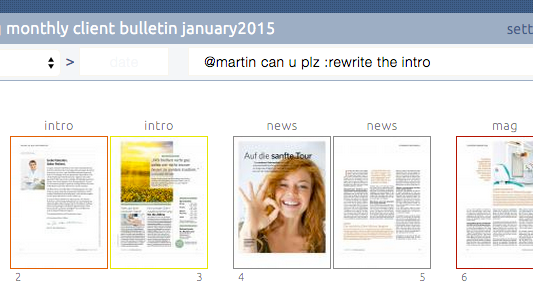 Essentially it doesn't matter where you put the colon - any message with a colon in it is viewed as task. But putting the colon right before the word describing the tasks makes it much more understandable for your team members.

Now that we have our task we want to assign it to a team member. It's just like making the task, you only have to prepend the name of the team member with an @-sign. So the final message would look like this: " @martin can u plz :rewrite the intro". 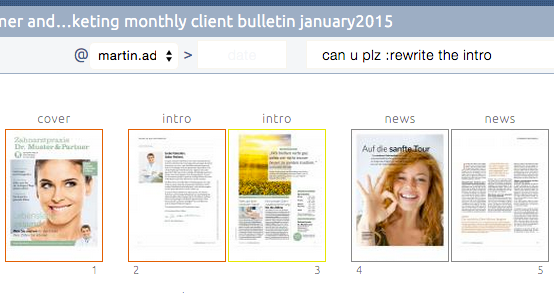 Now this message not only has more significance in the message timeline, but it will also pop up as a checkable to do in the profile of Brian.

Alternativly instead of having to write the name a member you can just select the member name from the drop down menu on left side of the message input.

Extra tip: You can of course address multiple team members with your message, like " @martin @pat @kathleen we need to postpone the foto shooting". But remember that a task can only be assigned to a single team member; so with " @brian @design @julia finish :composing" only Brian will have this task as a checkable to do item in his profile, since he is the first member mentioned in the message. Like this you are able to create a sub group of your project team for certain tasks, but still have clear responsibilities!